The wrist is a complex and flexible joint of the body. It is always used, so the appearance of painful problems affecting it is no surprise. Your wrist is also at risk because you instinctively try to break a fall with your hands. In this article, you can find out the most common causes of wrist contusions, wrist sprains, and wrist strains, as well as the different treatment options.

You can read in this article about the following topics:

The most common causes of wrist pain

Wrist pain is mainly caused by strains or sprains. An injury or overuse can also result in tendonitis or bursitis. Bursitis is a condition when fluid accumulates in the little sacs “cushioning” the wrist, i.e., the bursa, and even blood can get into the sacs.

Wrist problems mainly affect women. This is mostly because they are more prone to degenerative diseases affecting the muscles, joints, and bones. Such diseases are arthritis and osteoporosis. Women’s low calcium intake and hormonal changes may also make them susceptible to minor injuries.

Certain activities increase the chances of developing wrist pains. These include bowling and tennis, which require a lot of wrist movements, but typing and hair cutting, that use repetitive hand movements, are also to blame. Excess weight and diabetes can also lead to wrist problems.

During a muscle injury, the structure of the muscle is damaged to excess forces. Depending on the extent of the injury, moving the muscle can become difficult. Worst case, the patient is unable to move that particular limb. What is the difference between a strain and a contusion? 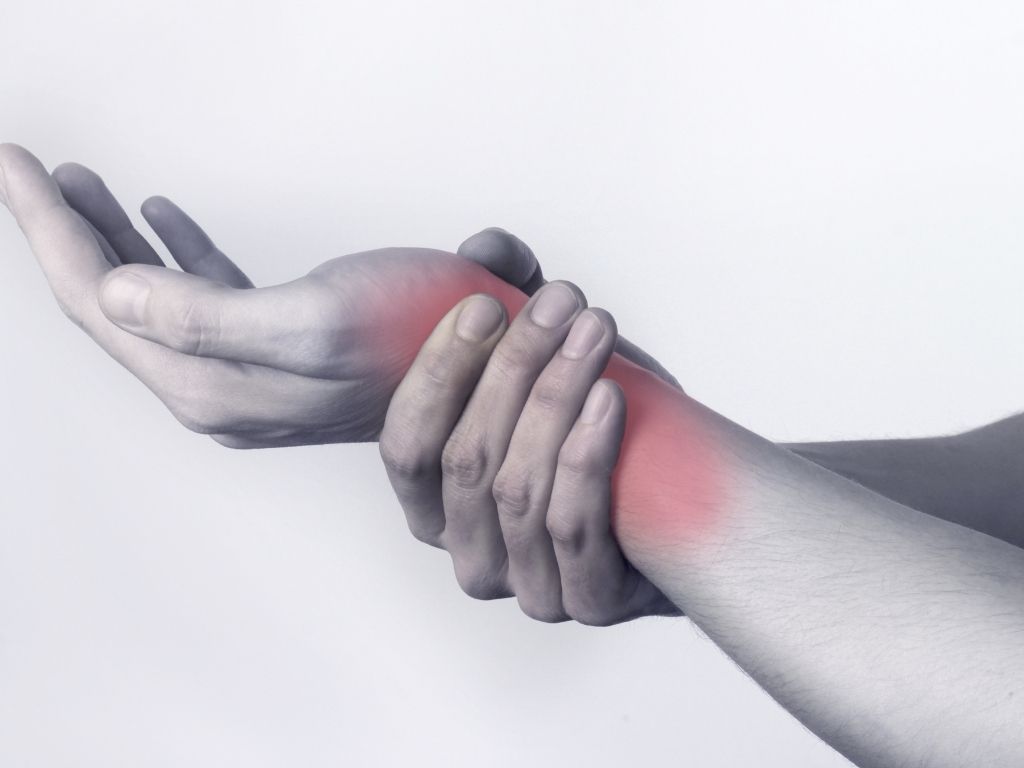 Strains occur when the muscle is subjected to excessive stress, which makes to muscles spasm and cramps up. Compared to simple muscle soreness, this causes greater pain. Strains are accompanied by muscle stiffness, swelling, and muscle weakness. You might not be able to stretch the damaged muscle, and you might still feel pain when the muscle is resting, which is accompanied by weakness.

A wrist sprain occurs when the wrist takes excessive force, causing the ligaments to stretch, twist, or even tear. In addition to the wrist, the knee, the ankle, and the thumb can also suffer this kind of injury. We distinguish between acute and chronic sprains. It’s acute when it’s a one-time injury, but with a chronic injury, the wrist ligament is continuously under excess pressure. Sprains have 4 typical symptoms: redness, pain, heat, and swelling. Mobility is affected, bruises can occur.

When a contusion occurs, the body part or muscle is injured by a blunt object or excessive force. It is most often caused by a blow or fall. This puts so much pressure on the muscle that the muscle structure gets torn, often accompanied by intense pain. The most common symptom is swelling, which can appear without a wound, but it can cause even more serious injuries. At first, contusions turn red, then within a few hours, they turn blue and later dark purple. When they are healing, they turn yellow, and then green.

Wrist pains usually don’t require medical attention. For minor strains and sprains, just place ice on the affected area, and rest your wrists. It is important not to ice your wrists for more than 20 minutes to avoid ice burns. You can repeat this method 4-8 times a day. Using a splint or elevating your wrist can also help ease the pain. Over-the-counter painkillers, such as non-steroidal anti-inflammatory drugs (NSAIDs) are also effective. One such drug is ibuprofen, which has analgesic, antipyretic, and anti-inflammatory effects.

An herb called arnica contains compounds that inhibit platelet aggregation the inflammation of tissues. Due to its properties, it’s particularly effective in the treatment of bruises caused by contusions. It is recommended to use an herbal cream 3 times a day. Don’t use it around the eyes, mouth, and open wounds, and it’s not recommended for children under the age of 3. It is also important to know that these creams can cause dermatitis in more sensitive people. For shoulder contusions, horse chestnut, comfrey, and witch hazel cream are also effective.

If the pain doesn’t improve, or even gets worse within a few days, see your GP, who may order diagnostic imaging tests. These include X-rays, MRI scans or CT scans. They might recommend to you to wear a wrist guard or a wrist splint, but exercises that strengthen the hands and wrists can also be helpful. A blood test can rule out underlying conditions such as autoimmune rheumatoid arthritis. This inflammatory disease affects women to most. It appears between the ages of 20 and 50.

Sprains and strains can occur at any age, but they are less likely in children under the age of 8. This is because of their physique, their bones tend to break first. A lack of exercise, i.e., total inactivity can increase the risk of sprains and strains, just as much too much exercise. Excess weight can also predispose to such injuries. Warming up before an intense workout and stretching afterwards is of paramount importance. Wrist braces and kinesio tapes help prevent injuries. It is advised to put these on before a workout session. These are made of breathable fabric, so they don’t cause any discomfort in the summer heat either. Available in a variety of colours, these tapes are extremely flexible. They help stabilise your wrist without affecting mobility.

In order to prevent wrist problems, have a healthy diet, and try to consume anti-inflammatory foods. Such fruits include cherries and bananas, but leafy vegetables are also an excellent choice. Oily fish containing omega-3 fatty acids is also very beneficial.

In this article, you read about the causes and treatment options of wrist pains. Although minor problems can be treated at home, persistent pain should never be taken lightly.